Neuroethology, endocrinology, and evolution of electrocommunication behavior in electric fish 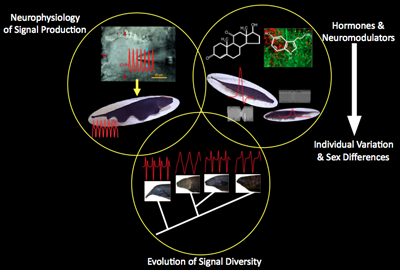 Our laboratory addresses these questions by studying the neuroendocrine control of sexually dimorphic communication behavior in weakly electric fish. The fish we study produce weak electrical signals from an electric organ in their tail, and they can use these signals to communicate the species identity, sex, reproductive status, and social rank of the signaler. The electrical discharges produced by the fish differ between different species of fish, between males and females, and between individual fish. Sex differences in electrical behavior are regulated by androgenic hormones such as 11-ketotestosterone and/or estrogenic hormones such as estradiol. The circuits in the brain and spinal cord that control these electrical signals are relatively simple and well-characterized. These features enable us to study the neural and hormonal mechanisms of species- and sex-specific electrical behavior from cellular to organismal levels. Furthermore, the diversity of signals produced by different electric fish species allows us to use comparative studies to investigate how behavior and the physiology of the nervous system have evolved.